So I've managed to progress a little with my challenge and even tick one off.

So this is where I'm at


The big tick on the list was to get down the lane for one of the last matches Worcester City played at their home ground. City need a new ground and despite lots of attempt by the club they haven't secured a new ground but will share with another local club (and bitter rivals). City's ground has been sold off to raise capital. my late teens and early 20's I could be found on the terraces watching City and on the away coaches too, so the first thing to go on my list was to see city play for a final time at St Georges Lane. I missed the last league match and didn't think I'd be able to tick this one off, until they announced a legends match v Liverpool (who City famously beat in the 1959 FA cup) Well I got a ticket and spent a lovely warm June afternoon watching the blues. Liverpool fielded a team of former players including John Barnes. 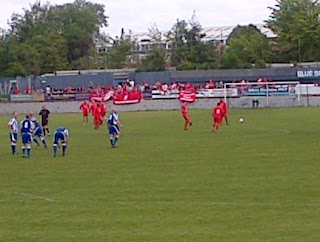 I tried out another restaurant for my '5 new restaurants thing' Altafs is a fairly new curry house and I had a lovely lamb pasanda, and shared pilau rice and naan with my friend. It was very good and makes me realise we have some great restaurants in the city. So that is 2/5 completed

I completed another RAK as I sent a parcel of goodies to Laura as she was having  a very hectic few weeks at work. Chocolate and fabric always make you smile and I made a pair of purple beaded earrings too. 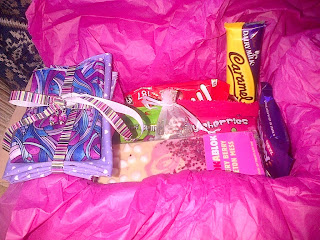 I've challenged myself to collect 101 postcards too. I've been buying them whenever we have a day out or a holiday. I've got 28 postcards now and I have been lucky that some of my penpals, blog friends and friends have sent me some too. I've put them all in an album to keep them nice. It has inspired my son to collect them too. If anyone would like to send me one please let me know.

Email ThisBlogThis!Share to TwitterShare to FacebookShare to Pinterest
Labels: 101/1001