Jo at Serendipitous Stitching is celebrating her 50th birthday with a big blog hop. Click on the title at the top to go to Jo's blog where you can read the entries in order. this is what Jo has to say about 1985...

1985 - Jo was 19.  This was a year of massive changes for Jo.  She sat her 'A' levels in the June then got a summer job working in the bar at a local holiday camp.  She lived on site with her boyfriend and learned how to cook for herself when the takeaway was shut!  In October Jo started her first proper job as a Trainee Insurance Broker with Sedgwicks Marine Department in the nearby city of Norwich.  She earned the princely sum of £286 per month.

And now for me... 1985 was the year I turned 8. It was the year I went up to Junior school being taught by Mrs Hemsley, who drove a Morris Minor. I had already learnt to sew and had completed a long stitch of a fawn in a green frame. I still have it somewhere but after the trauma of (unsuccessfully) trying to find a photograph of me at Mum's yesterday (seriously, that woman could be on hoarders) I am not venturing into my garage for it. So I had a collar length brown bob which my mum turned under with the hot brush every Sunday evening. I called it the rounded pyramid. It wasn't my favourite hairstyle. Holidays were spent at my Grandparents in Surrey, who celebrated their 40th Wedding Anniversary that year with a big party. I wore a red dress and asked the DJ to play Paul McCartney's the Frog Chorus. It was met with murmurs of disdain, my defence was I was 8 and didn't discover Wham! until 1986. The year ended with my parents separating.

So on to a picture that Jo would like... 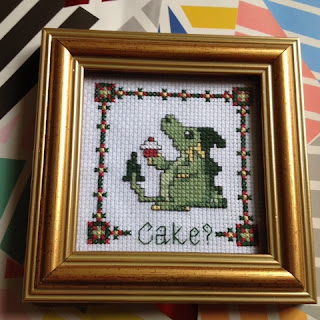 It had to be a dragon with a cake! (Dragon Dreams with border designed by me.)

Happy birthday Jo! I hope it's been a fabulous one.

Thanks for hopping by, I'll be back later with a dismal attempt at a rather late GG post.