Firstly apologies for some random old posts that have shown up at the top of your feeds. I've been having a bit of a blog tidy up ready for it to be freshened up by hubby. I'm not sure what I've done but there you go, feel free to ignore them.

Anyhoo, here is the finished sampler. I'm pleased to say it was well received and I'm very happy  with how it turned out. 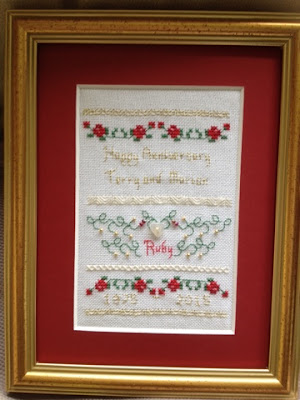 I made a couple of small changes to it, I wasn't keen on the green thread listed in the key so changed that one for slightly brighter one and added gold beads rather than the white ones suggested.

I slightly changed the wording to and added my in-laws names and put two dates rather than just this years date as the chart showed.

I ended up framing it in such a rush as my plan had been to pop into town for the frame and mount on Friday but due to boy being virusy, that completely went out the window. A little more time might of made it slightly straighter!

As I mentioned in my gifted gorgeousness post I used a chart booklet I've had for donkeys years. I did a sample for their 30th wedding anniversary from it too, and whilst we were there at the weekend I took a photo of them together... 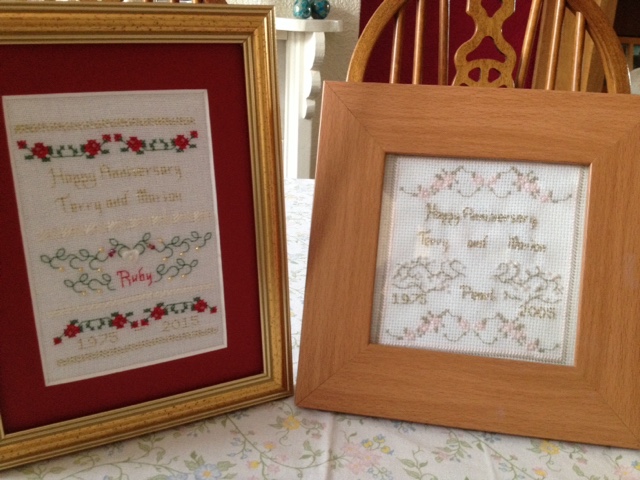 Each sampler in the booklet is a slightly different size so it's not my dodgy stitching although there probably is some dodgy stitching in the first one. It's surprising looking back how I would have chosen to frame the sampler differently

If you're curious by the charts came from them - they were from booklet called seven treasured anniversaries by framecraft which I picked up for the bargain price of 20p when Beatties became house of Fraser.

Anyway, back to stitching on Steph's birthday present...I have less than a week. Eek!

Thanks for stopping by xx