Hi Everyone,
I really am blessed to say that I have a job I love and work with great people. When one of them got engaged at the weekend I knew I wanted to make a special card. When I brought some fabric at the weekend you may recall it had a sweet little dove section on it. You can see it below bottom middle. 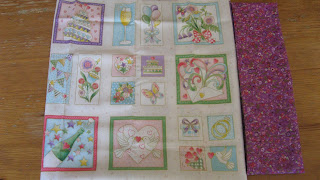 I put some wadding behind it and stitched round the gold outlines using a machining gold thread which I doubled. It was one I grabbed in Tesco of all places for another project that is half done and I'd not used any so I had no idea how suitable it would be but it was a dream to stitch with. I also satin stitched the little heart in the middle in pink and went round the darker pink hearts in good old DMC. I also added their initials. 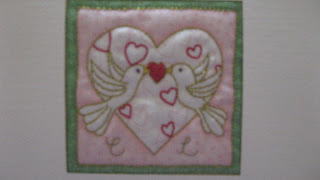 I mounted it in a square card and added a little peel off at the bottom, I decided that I didn't want to go overboard and I wanted to let the stitching speak for itself. 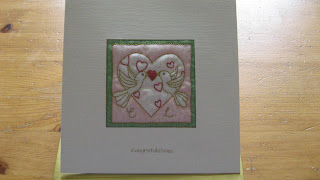 It's often a gamble when you give a  handmade card or gift to someone you've not given to before as to whether they will like it, but I'm pleased to say they both seemed to like it.

Right on to Fathers Day.

This was something that had been in my WIP basket since March and I decided that it was time it got finished for fathers day. Hubby is a big gamer so when I made the 'read on' one for Laura, hubby asked if I could do a Game On version. It was easy enough to get the word game in instead of read and I used the little space invader from an issue of Cross Stitcher. 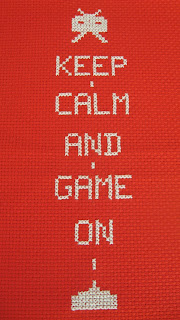 As you can see it's still unfinished as I the hangers I wanted for it were out of stock, so if anyone knows a good inexpensive supplier of the little hangers for stitching/quilting/embroidery then please let me know.

So on with the next project! I've been putting in a few stitches here and there on the Game of Thrones chart but my ME has rather gotten the better of me and I've not been stitching anywhere near what I'd like to be. It'll be a lovely gift whenever it gets finished and I know Hubby will like it.