So here are my makes for the Travelling Christmas box. Laura received the box this week so I can reveal my makes.

I mentioned earlier in the week about finally getting my sewing machine out - I made a small-ish cushion for the box, this was actually the second attempt as the first was rather large! I got rather carried away with the first. My plan is to finish off the large one as a cushion, before Christmas. (*disclaimer - I didn't say which Christmas!!) 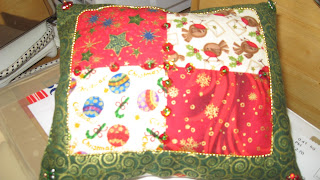 I beaded it round the centre panel and added a few sequins and some beads to the corner. Apologies for the photo as it was late at night so I had to use the flash.

Next I made this tiny humbug from a Kincavel Crosses design. I thought the fabric was 16 ct, which I thought would do as I didnt have any 14ct, turns out to have been 18ct so the finished humbug was way,way smaller than planned! Oh well, small is beautiful as they say. 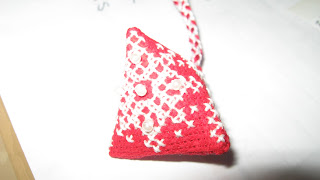 I made two little felt and stitched decs too from an old issue of Cross stitcher. They were nice quick stitches to do! It was one of those weeks where it took me longer to make them up than to actually stitch the designs. 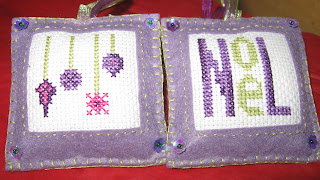 Lastly I made the little tree. It almost got left out as I'd popped my makes on top of the box ready to put in and it got knocked off, and disapeared under the table. Anyhoo, here it is, the star sequins were a bit of a last minute addition as it looked like an apple tree from a Mr Men book without them! Not the best picture again as I turned off the flash as it was reflecting on the sequins. 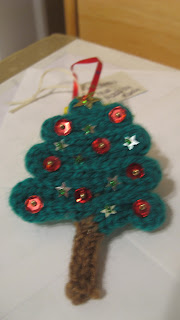 So there are the makes for the box, It'll be back with me shortly, I can't wait to see what Laura has put in.

I noticed from my last post I hadn't linked Steph in for her gorgeous brooch, so here is her blog. I chose this page as it has some very, very cute charts and also the link to her Folksy page for the wild women.

So I hope my friends you all have a fabulous weekend. Mine will be spent watching the last Grand Prix of the season. Monday I go into mourning for 4 months until the start of the next season. Lots of craft plans for the weekend, Firstly to start making these stockings for my friend. I want to give them to her in 10 days. It's going to be a push to get them done. I should have made them in January when she asked me (slap on wrist for leaving it this long). Best I get the fabric cut today! I've never made a stocking before so it will be a little bit of trial and error (hopefully not too much error as I really don't have the time!!!

Well on with the housework (otherwise known as delay tactics for stockings!) Until next time. xx