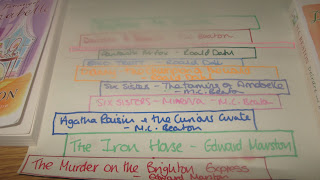 I've read a couple more books since my last update so I've finished The taming of Annabelle by MC Beaton and also Deirdre and Desire by the same author, That now makes me 7" into the 66" I need to fill. A long long way to go but 2 years to do so. So here is my book height chart for you to see. Ive realised there must be a sticky finger on the lens, I've tried to get it off but it's not moving so some lens cleaner from town is now on the shopping list for today.

So many of my things on the list have several things within the thing so I don't feel like I'm making any progress at times. I'm determined after Christmas when it's a bit quieter craft wise that I'll get cracking with some of craft things on my list. I'm really struggling to think of RAK's to do, I'm a fairly generous soul so I'm sure I do them anyway but most of the time I kind of think, well I would have done it anyway so it's not exactly random. We've almost finished our Operation Christmas Child boxes. I just need to put some sweets in now for both of them.
I'd like to do a craft swap with someone new too, so if you fancy it, drop me a message.

Lastly another Pinterest project... Re-moulding crayons. Anyone with small kids will know how many crayons they have in their house that get broken into small pieces and in our house up to now thrown out as I get fed up with picking them up. I found this idea on pinterest for remoulding them using silicone cake moulds. Well I couldn't find any cheap ones, but we had some rubber ice cube trays in the back of the cupboard so I decided to sacrifice one of them as they were about a quid from Ikea. Fortunately it didn't melt in the oven as you put the crayons into the oven for 4-5 mins at 150c to melt them down. The crayons in their usual form are put into the moulds in little bits, I found 1cm pieces or there abouts worked well as it meant I got more crayons in, and then put in the oven as above. I haven't credited any particular pinterest pin as there were several of them for this.

Here is the result with them still in the mould 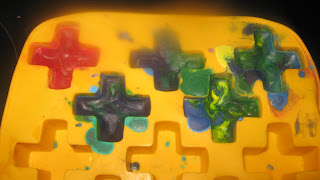 ﻿
﻿And here they are once they'd been left to set overnight. I did turn some out after about 4 hrs for thinner ones but I was a bit keen with the second batch I managed to snap one in half. 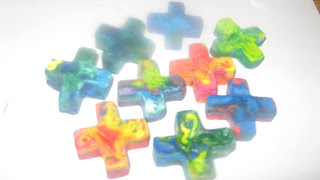 They look quite cool and work perfectly well too. Lottie has already tested them out!

Thanks for reading, back to the stitching posts next as I have a biscornu to share once it's been received and what should appear on my doorstep yesterday but the Christmas Travelling box!!! YAY!!!!

Have a good weekend everyone. xx
Posted by Kerryp77 at 10:20

Email ThisBlogThis!Share to TwitterShare to FacebookShare to Pinterest
Labels: 101/1001